The Man on the Moon, at 2 Norfolk Street, has been a popular pub and music venue in Petersfield for years – music magazine Drowned in Sound has called it “less-than-salubrious, yet fondly regarded”. The pub was taken over by John Nixon in July 2000, after he had been landlord at the White Hart (now the Backstreet Bistro). The pub was formerly owned by Pubmaster and then Punch Taverns. 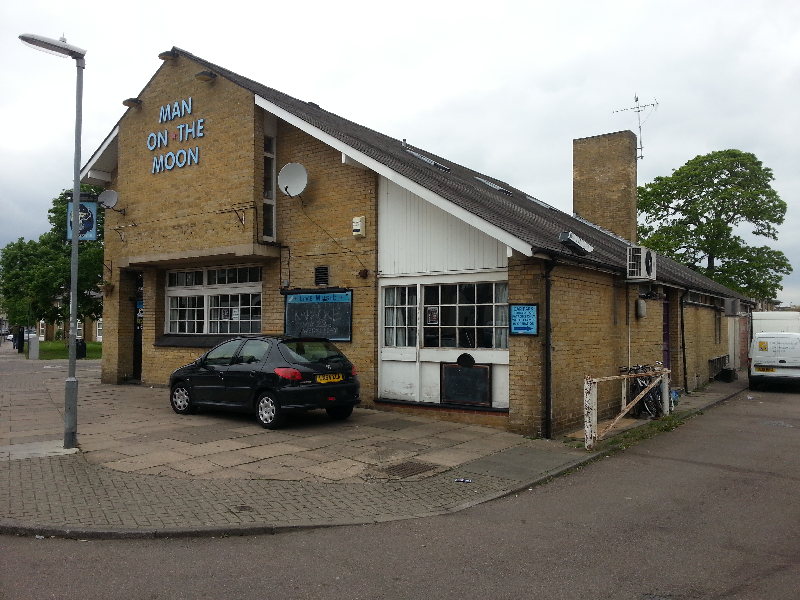 Rumours around the future of the pub had been circulating: CAMRA thought it was shut already on 4 June, and on 7 June the news was confirmed – the new lease owners have given John notice to leave by October. John says he was in the process of applying to buy the lease of the pub himself when he was gazumped. John says on the website:
“Some of you may have heard the rumours flying around about the MOTM and I can sadly say they are true. Despite a 9 month long legal battle with greedy property developers & Punch Taverns, the Man on the Moon has been lost, and the doors will close for the last time on Oct 1st. The Moon will leave a hole in the local music scene that badly needs to be filled, We will be back, this time Bigger and Better!! We would like to thank everyone that has played at the Moon and made the past 13 years amazing! Especially Last Gang In Town, Dawn Kelly, Kelly Allen, Bruno Gonçalves, Will Smithe and Lex O’Farrell, thanks for all your hard work!!”

The landlord of the Alexandra Arms, Craig Bickley, says the owner is Beechwood Property (probably meaning Beechwood Estates), and they are planning to improve the pub. Beechwood Estates, also known as Bennell Developments, previously turned the Jubilee pub into houses, and bought the Royal Standard & tried to turn it into houses without success. Despite this history, property consultants Everard Cole told the Cambridge News that “Rumours that the pub will become student flats are simply untrue. The pub may close for a few weeks or months but will reopen as a pub and will remain so in the long term.” They also said on Twitter: “Man on the Moon, Cambridge. New FOT [free of ties] lease offered; experienced operator sought. Full details to follow shortly.”

Cambridge News reported last July that the city council owned the pub, and Cllr Colin Rosenstiel confirmed that “The future of this pub is firmer than most because [Cambridge City Council] owns freehold, on 99 year lease from 1963 for pub use only.” Cambridge City Council, in the ‘Interim Planning Policy Guidance on The Protection of Public Houses in the City of Cambridge‘ (IPPG) of October 2012, lays out criteria before a pub can be lost and classes the Man on the Moon as a “Pub Site within edge of city clusters providing an important city wide economic and local community function”. Regarding any plans for the car park, the IPPG says: “When considering proposals for the development of car parking areas, the Council will require evidence that this will not undermine the viability of the pub, especially in the outer suburbs or village areas or site adjacent to main roads.” Building on the car park is not an option while the pub remains.

The pub has long been part of the Petersfield community. Simon_K on Flickr says of the early days of the pub, “In 1959, work began along East Road on central Cambridge’s first major slum redevelopment. Completed in 1969, with the final addition of the Man on the Moon public house, the scheme was designed as a fresh start, a comprehensive development of two, three and four storey interconnected blocks of flats, maisonettes and houses. The architects were David Roberts & Geoffrey Clarke for the City of Cambridge Housing Dept.”

The landlord before John was Mary Reid, who left in June 1996 to run the Royal Standard. She ran folk nights, which then moved to the Portland Arms. It was refurbished and briefly called The Office from 1998-2000, before John took over and changed the name back.

Although some local residents have had issues with late-night music and drinking, this will be a loss to the Cambridge music scene. Among the tributes and laments, Cllr Richard Johnson said “It will be a shame if Man on the Moon turns into another upmarket gastropub. Camb[ridge] needs pubs & clubs with character”.

John has been generous to the local community, for example letting PACT use his venue for our Summer Events – most recently for our carnival costume workshops. We believe that the Man on the Moon must remain as a pub, and we hope that the new lease owners are sincere in this intention and that the new landlord will keep it as a music venue and asset to the community.